Belvoir St Theatre launched its 2020 season with one of its biggest successes of last year, the compassionate and heart-warming exploration of depression and suicide, Every Brilliant Thing. While the play does not avoid the anguish inherent in its subject, it affirms life by offering ways in which we can talk about suicide, both public and personal, and asking us to consider how we treat those impacted by a loved one’s suicide.

A list of brilliant things, a device uniting the solo narration, is compiled by a seven-year-old boy as a way of telling his suicidal mother that life is good. Beginning with “Number one: ice cream” the list, originally aiming at a thousand, expands as it charts the narrator’s growing up, and eventually becomes the channel through which he deals with life’s problematic issues. At the same time, his inventory serves as an entertaining way of enlisting the audience as some have been given numbered cards from which they contribute ‘a brilliant thing’ when called upon. Often the listed item draws appreciative laughter and often a ripple of understanding and assent.

In this 2020 version, Steve Rodgers takes the role of narrator and solo performer previously filled by Kate Mulvany. It is a very demanding role as fairly extensive impromptu interactions with audience members rely upon the actor’s ability to indirectly guide individual responses and as there is no plot tension to maintain audience interest the whole is sustained by Rodgers’s energy. Fortunately, Rodgers has an engaging and likable manner, and brings a convincing and touching authenticity to his account of his interactions with his mother, his father, his school counsellor/talking sock-dog and troubled relationship with his eventual partner, Sam.

Performed in the round and within an appreciative community, and in a well-lit environment rather than the conventional darkness, both place and space enact the ideal at the heart of the play. Deep, inhibiting depression and suicide are common human occurrences, not exceptional as we might suppose, and it should be possible to acknowledge mental health problems openly, without shame or apology and in faith that our community will offer warmth and support. For most seven-year-olds the world offers a thousand good things, but life has a way of taking off the shine even for the most courageous. 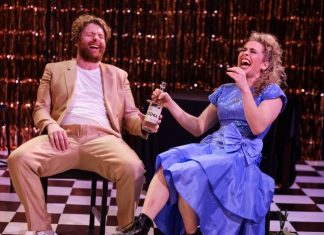 Catherine Skipper - August 1, 2022
Much Ado at the Flight Path Theatre in Marrickville is well-worth seeing for its quirky transplantation of Renaissance court conduct into the modern and equally demanding code of effortless cool.