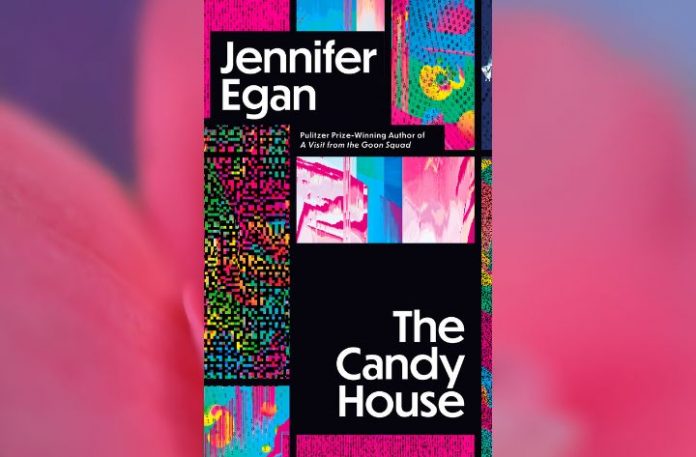 Although Jennifer Egan published her first novel in 1994 (The Invisible Circus), it was her 2010 Pulitzer Prize-winning A Visit from the Goon Squad that catapulted her to fame. Her subsequent Manhattan Beach (2017) was widely praised and won the 2018 Andrew Carnegie Medal for Excellence in Fiction.

Now, Egan has produced The Candy House, a book she describes as a “companion” (the term “sequel” is avoided by both Egan and publicists) to Goon Squad. Several of Goon Squad’s characters reappear, among them Lou Kline, Bennie Salazar, Sasha, Lincoln and Lulu.

The Candy House begins in 2010 with Bix Boulton wandering the New York City streets, afraid he will never have a new idea. Bix sees a poster advertising a discussion of the work of Miranda Kline, the anthropologist whose theories of algorithms explaining trust and influence among members of an isolated Brazilian tribe that Bix adapted to make his fortune as a tech whiz.

At the meeting, Bix learns about Own Your Unconscious, a technology allowing users to access the memories of others if they’re willing to share their own. This innovation develops into a major movement with detractors and counter movements: the “eluders,” who advocate privacy, and the “proxies,” who impersonate them. Another futuristic element includes the implantation of weevils in the brains of humans and the “cleaning” process undertaken to remove them.

This synopsis makes The Candy House sound like dystopian sci-fi. It isn’t. It is more difficult, though, to pinpoint exactly what it is. Told by a range of shifting, ultimately interconnected characters, The Candy House (at least the first three quarters) is highly readable, partly due to the suspense when the storyline shifts to a new person. Who is this? What is his/her connection to the other characters?

The various sub plots are frequently compelling, from the drug addict Roxy Klein to the self-possessed 12 year old Lulu to the autistic and lovelorn Lincoln. These lives intersect, and there are stories both heart-warming and heartrending.

In 2032, an adult Lulu enters the murky world of espionage. Here the story changes from straightforward narration to her account of survival in a milieu fraught with dangers, among them sexual violence.

Several of the Baby Boomer characters mourn their increasing irrelevance. As Bennie writes in an email: “Tongue-in-cheek nostalgia is merely the portal, the candy house, if you will, through which we hope to lure in a new generation and bewitch them.”

Shifting perspectives and narrators are hardly new in 2022. Many modern novels have no hero/heroine nor even a protagonist. Absorbing though much of the book is (although I admit to losing patience with the multipage email exchange near its end), its multiple threads ultimately leave a sense of emptiness, like a tasty meal which fails to keep you full for long. The Candy House’s characters come and go so fleetingly, it is hard to care deeply about any of them.