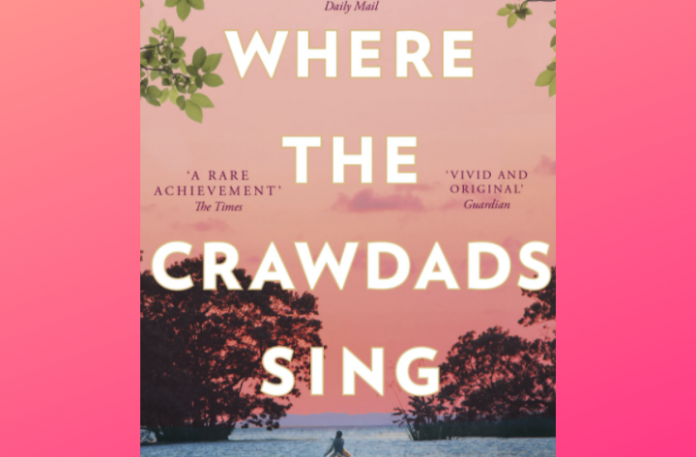 This runaway bestseller – with over 4.5 million copies sold – is genre-defying. It’s part whodunit, part coming of age story, part rumination on the effects of social isolation and prejudice on a young girl, with a healthy dose of nature writing thrown in.

It opens with the discovery of the dead body of Chase Andrews, a former high school football star and a known womanizer, and alternates between the investigation into his murder and the lonely childhood of Kya, the “Marsh Girl”.

Kya (Catherine) grows up in a shack in the marshes of North Carolina. At age six, she watches her mother leave, never to return. Her much older siblings have already flown the shabby nest, due to the abuse of their alcoholic father. Her closest brother, Jodie is next; after a brief rapprochement with her father, Kya loses him as well, and is left to fend for herself.

Where the Crawdads Sing is the debut novel of its author Delia Owens, a former wildlife scientist who spent over 20 years in Africa. She has written three works of non-fiction. I was keen to find out what made it so popular. While there are sections of beautiful writing, and an intriguing murder mystery which only resolved in the final pages, I found it too unconvincing and too reliant on stereotypical, superficial characters to merit the hype.

It opens with the discovery of the dead body of Chase Andrews, a former high school football star and a known womanizer, and alternates between the investigation into his murder and the lonely childhood of Kya, the “Marsh Girl”.

From there – to find the book remotely credible – one has to accept that that a young child can survive and raise herself alone in the swamps, surrounded by hostile townspeople and with no source of income. Then believe that this illiterate young woman learns to read and write so quickly and well (from her boyfriend, local high school student Tate during their brief relationship, after which she teaches herself) that she becomes a successful author and illustrator of books on the marsh’s ecology.

Fifteen-year-old Kya undergoes a miraculous transformation – from declaring “I ain’t scared”, and “You don’t have to say nothing”, to sounding like a university educated scientist. Within months of mastering the alphabet, she describes a shell: “An ornate scallop. Pesten ornatus. I only see them rarely. There are many of that genus here, but that particular species naturally inhabits regions south of this latitude because these waters are too cold for them.” Really?

The Good Black Folks trope is also heavy handed, with the book’s three Black characters (Jumpin’ Jake, his wife Mabel and the prison guard Jacob) just too earthy and big hearted to be true. While they are clearly the good guys, their speech sounds like something from Huckleberry Finn: (“Gotcha yo’oatmeal, Miz Clark”; “Miz Clark, ya got anotha viz’ter”; “Lawd, child, let’s don’t worry none about the details.”)

Owens is at her best, and most believable, when describing the marsh, its wildlife and Kya’s affinity with it. Unfortunately, this isn’t enough to keep the story afloat for its 268 pages.