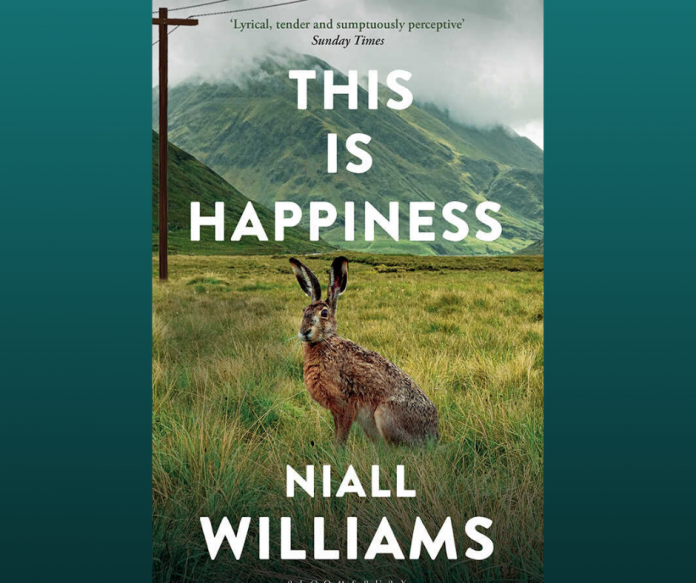 This is Happiness intrigued me with its title. Was the title sarcastic, a gibe at the miseries of an impoverished rural Ireland? Or was I about to read a twee tale of a mythical, pastoral, romantic Ireland?

In fact, this genre-defying novel – Dublin-born Niall Williams’s tenth book – is a rare find. Here is a novel that features guilt, atonement, terminal illness, loss of faith and unrequited love, to name a few – but can best be described as joyous.

Part of that joy is the way that Williams’s prose sings from the page. His use of English is at times idiosyncratic, but never mundane. Yes, the books can be wordy, and there were a few times when I had to restrain myself from skipping ahead to see what happened to his fascinating and flawed characters.

I didn’t, and was rewarded with prose like this description of the narrator’s beloved grandfather: “A short and almost perfectly rounded man with eyes always near to laughter and tufted hair that sat like a small wig on a football, Ganga had the large ears that God puts on old men as evidence of the humour necessary for creation.”

This is Happiness is set in Faha, a small town in County Clare where rain is constant, and legendary. “Rain … was a condition of living. It came straight down, sideways, and frontwards, backwards and any other wards God could think of.”

Williams draws Faha and its inhabitants fondly, but these are no cutesy simple villagers, this is humanity, warts and all. At long last, “the electric” is coming to Faha, bringing with it inevitable changes. Into the town come dozens of workers to lay the power lines and bring Faha into the modern world.

Noel, whom everyone calls Noe, is staying with his grandparents, Doady and Ganga, after leaving the seminary due to a crisis of faith. Into this household appears Christy, a worker with the electric scheme, who boards with Noel’s grandparents. Christy, though over 60, forms a close bond with the 17-year-old Noel, who gradually learns the 50-year-old secret that has drawn Christy to Faha.

Describing Christy’s spontaneous singing, Williams could instead be describing his own novel: “It seems to me that the quality that makes any book, music, painting worthwhile is life, just that. (They) can never be as full, rich, complex, surprising or beautiful, but the best of them can … turn you back to look out the window, go out the door aware they you’ve been enriched, that you have been in the company of something alive.”