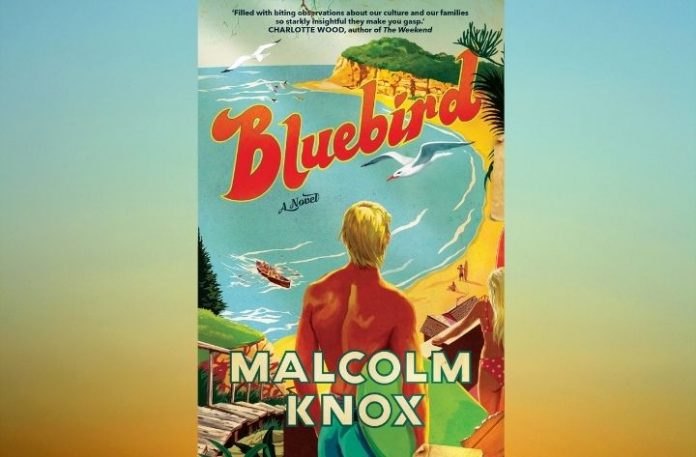 Malcolm Knox is best known as a journalist, columnist and former literary editor for the Sydney Morning Herald, but he is also the author of several books, both fiction and non-fiction.

Bluebird is his sixth novel. It is set in the mythical beach town of Bluebird (location unspecified, it is something of a composite beach town whose locals spurn tourists and rage against the possibility of public transport making it more accessible).

Its protagonist, Gordon, and many of the major characters are 50 somethings (they have this in common with author Knox). Unlike their distinguished creator, these people are going nowhere – slowly. Gordon is an ex-journalist who clings to The Lodge, a ramshackle dwelling that clings equally tenuously to its cliffside.

An array of larger than life characters wash up and hang out at The Lodge and the beach, surfing, drinking, reminiscing and clinging to the Bluebird of old with, as Knox aptly phrases it, “crippling nostalgia”.

Gordon is broke and can no longer afford to hang onto the crumbling Lodge. This is the crux of the plot, along with: a complex web of financial intrigue; a gay teenage son with ADHD and aspirations to cricket greatness totally unmatched to his talent; a drug dependent brother in law; a cheating wife with a taste for 22-year-old golf pros; an ailing, cantankerous father desperate to escape his nursing home, and a 42-year-old family secret. That’s just for starters.

Knox is at his best with his descriptions of Bluebird and its characters, such as Tony: “The bones of his shoulders were still broad but the flesh holding them together was concave and withered. The handlebar moustache was moth-eaten. The forehead was higher, to reveal a galaxy of scabs, crusts, keratoses, basal cell carcinomas and, with any luck, melanomas.”

At 496 pages, Bluebird does meander, and I wish Knox had cut 100 pages. While the plot has numerous twists and turns, the early mention of the death of Gordon’s older brother, Owen, as a child, is an all too obvious signal that a long-held childhood secret is about to be revealed – eventually.