All Our Shimmering Skies 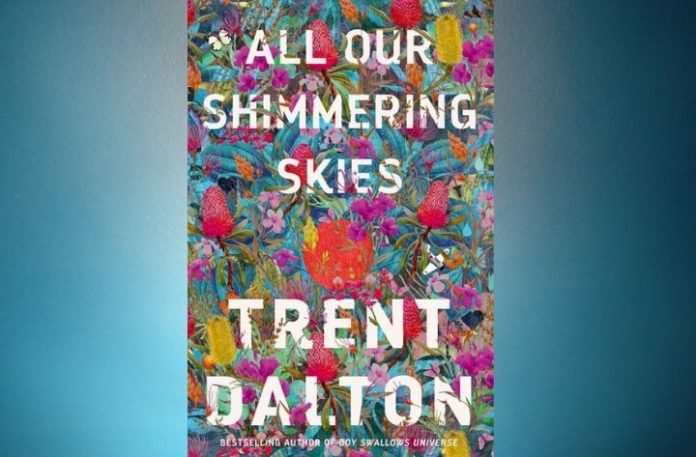 Two years after his Boy Swallows Universe achieved best seller status – some 500,000 copies sold – Trent Dalton has produced another novel. All Our Shimmering Skies, like his first novel, is often gritty, violent and harrowing (inspired, said Dalton, by his own childhood), but his luminous prose makes it nonetheless a compelling read.

Like Boy Swallows Universe, it is a coming of age story whose main character (a girl this time) lives in a world of addiction, abuse and danger. Molly Hook is age seven when the book opens and her mother dies by suicide. We meet her again at age 12 when most of the story takes place. Molly digs graves with her father Horace and Uncle Aubrey. Both are alcoholics, her father a pathetic wreck of a man in whom good and evil co-exist, her uncle an abusive bully.

“When Horace Hook is in a light mood, Molly sometimes suggests … more food to eat. Fewer maggots in the sink. Fewer bloodstains on the kitchen walls … fewer weevils in the oats in the pantry … Fewer empty whiskey bottles …”

Molly learns that, years ago, an Aboriginal man named Longcoat Bob put a curse on her grandfather. Convinced that her family’s misfortune (enormous) will only end if the curse is lifted, she runs away from this dysfunctional home (narrowly escaping being murdered by Uncle Aubrey). Her escape happens to coincide with the Japanese bombing of Darwin, with the ensuing chaos facilitating her flight.

Much of All Our Shimmering Skies is a road trip and quest through the Top End, in the company of Uncle Aubrey’s ex-girlfriend Greta Maze and Yukio, a Japanese fighter pilot who parachutes from his Zero. Think The Wizard of Oz, think The Odyssey, think of any number of quest narratives. Throw in a dash of magical realism, such as an eagle dropping a baby from the sky. Then transplant them to the vibrant landscape of the Northern Territory, beautifully and lovingly described by Dalton.

“And then the waterfall comes into full view and it opens up to Molly Hook like a new world. An immense natural hall with a sky roof and mighty walls made of deep red sandstone … A waterfall … as deafening and spectacular as would be a thousand white horses charging over that same 250-foot cliff face. A rapid torrent rush so forceful she has to shout to have her voice heard …”

I did find the use of a mysterious Aboriginal elder, Longcoat Bob, a bit hackneyed; surely the stereotypical wise, traditional Aboriginal person punishing a white man for greed (however deserved) is just a little bit overdone?

All Our Shimmering Skies is, at times, shockingly violent and harrowing. Ultimately, however, it is a story of redemption and love. As Yukio tells himself, “People can change here”.