The $2.7 million starburst building was co-funded by the City of Sydney and the federal government. Director of Weave, Shane Brown, had a vision for a new building, having worked for many years out of a refurbished amenities block with a tin roof. “Young people say they feel respected by having a purpose-built space for them,” Mr Brown said. “Staff comment that you can have 60 people in the building and it still feels spacious.”

Bahadur Bryson is a dual diagnosis (coexisting mental health and substance use issues) team counsellor, caseworker and project worker. She has been at Weave, with the Speak Out program, since October 2012, and appreciates the building’s capacity for diverse activity. “We have computers and a massage room, counselling rooms for individuals, couples and families, meeting and conference rooms that double as art rooms.” Ms Bryson has seen vines begin to weave through the roof supports. “There’s also a lemon tree and orange tree on the roof. We’re in the process of making a veggie garden – the community will be invited to come for workshops.”

Mr Brown estimates that over 1,200 young people have received assistance within the new building.

Kat Hines first came to Weave earlier this year to see caseworker Kyrsten Winkley. Ms Hines has taken part in various art activities and has entered a poster design for the Mad Pride youth event to be held at 107 Redfern Street, Redfern, on Wednesday October 9. The event aims to raise awareness of dual diagnosis and address taboos associated with young people’s access to mental health services.

“The staff at Weave really care,” Ms Hines said. “I come here a lot. It’s just such a supportive and genuine place.” Ms Hines is accompanied most days by Indiana-Mischief, her beloved Jack Russell-Mini Foxy-Corgi-Kelpie. “Indy is a mindDog,” Ms Hines said, “a service dog – I have a licence issued by mindDog in Surry Hills – it’s a public transport pass and access certification that means Indy can come anywhere with me. We had to do training and pass a test to qualify.”

Ms Hines didn’t realise her love of art until recently. “I did one course through Mission Australia and I won a scholarship from the Sir David Martin Foundation.” With the scholarship money Ms Hines was able to purchase an SLR camera. She aims to continue learning and honing her art.

Designed by Collins and Turner Architects in Surry Hills, Weave’s building features a distinctive steel canopy shading structure, which will eventually blend into the surrounding park, naturally insulate rooms beneath and shield the rooftop barbecue and veggie patch above.

Energy-efficient building materials have been used throughout construction, including low-energy lighting, natural ventilation, tanks to collect and re-use rainwater; the innovative recycling of slate roof tiles into pebbles for the garden and railway sleepers made from one of Australia’s first plantations of ironwood in the 1930s have been transformed into timber pavers for the internal courtyard.

Mr Brown says the rooftop garden and courtyard are the building’s highlights. “People are always delighted by these areas. They add so much flexibility and, in an air-conditioned world, we’re fortunate to work in a building that allows so much connection with nature and being outdoors.” 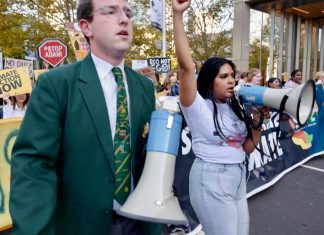 South Sydney Herald - June 6, 2022
Congratulations to our 31st Prime Minister, Anthony Albanese, and to Tanya Plibersek, who has retained the seat of Sydney with a preference count of 66.8 per cent, ahead of Greens candidate Chetan Sahai with 33.2 per cent. Plibersek takes up a crucial portfolio as Minister for the Environment and Water.