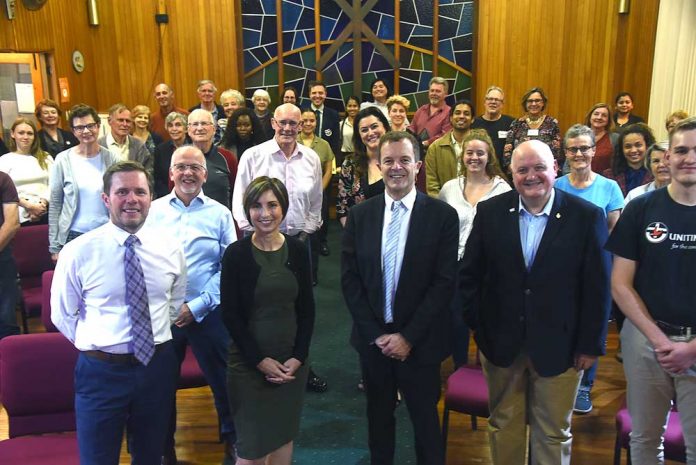 Ms Maiden is Uniting’s Head of Advocacy and Media: Mission, Communities and Social Impact. She was speaking at a forum organised by Engadine Uniting Church in April.

At the forum, the Hon. Mark Speakman, NSW Attorney General, provided an update on possibilities for drug law reform currently before Cabinet. (Despite setting an initial deadline of a response by the end of 2020, he said more time was needed, and a response will be made this year.)

Ms Maiden commended the NSW government for its willingness to consider changes to our drug laws, particularly a less punitive approach to people found in possession of small amounts of drugs for personal use. Yet Ms Maiden urged the Attorney General to avoid replacing current laws “with a system that is barely better”.

In 2016, the Synod of the Uniting Church of NSW and the ACT passed two resolutions relevant to drug use. One was the support of decriminalisation of possession of small amounts of prohibited drugs. The other was to increase investment in drug and alcohol treatment services. Uniting and a range of other organisations launched the Fair Treatment campaign in 2018 to work towards these aims.

In 2019 and 2020, two inquiries into drugs heard numerous submissions and made their own recommendations.

In November 2019, in a report on drug deaths at music festivals, Deputy State Coroner Harriet Grahame recommended pill testing, a ban on sniffer dogs and a reduction in the number of strip searches. (There were six deaths of young people at music festivals in two years from drugs.)

Last March, the Special Commission of Inquiry into the Drug ‘Ice’ released its report, with 109 recommendations.

Jackie Fitzgerald, acting executive director at the NSW Bureau of Crime Statistics and Research, told the “ice” inquiry that Sydney’s CBD and inner-southern suburbs had the highest rate of “ice” possession in the state. (While the state’s highest, this has remained relatively stable for the last decade. Several regional areas, such as Coffs Harbour and Grafton, have lower overall, but rapidly increasing, rates of “ice” possession.)

A major sticking point in the government’s response to the “ice” inquiry has been how to deal with people caught with a small amount of illicit substances for personal use – one of the two key issues in the 2016 Synod resolution.

At the meeting in Engadine, Attorney General Speakman explained that while the government’s response had yet to be finalised, Cabinet was looking at alternatives to decriminalisation.

He referred to these as “depenalisation” and stressed that the focus would still be on treatment and diversion, rather than punishment. (This would not be unique in NSW, where a cannabis cautioning scheme has operated since 2000 allowing police the option of simply cautioning those found with small amounts of marijuana.)

Under a depenalisation regime, low-level offenders could be diverted to treatment programs rather than the criminal justice system, he suggested. Fines and the requirement to enter treatment programs could replace more stringent punishments. Initial offences would be treated more leniently than subsequent ones.

Ms Maiden considers this approach flawed: “Our preferred model would be to not apply criminal or civil sanctions at all – no sentencing, no fine, no community service orders. The Uniting Church … supports the decriminalisation of the possession and use of small amounts of all drugs.”

She added, “We do not support the legalisation of drugs. We believe they should remain illegal but that criminal penalties should not flow from possessing small amounts of all drugs for personal use.” Until this happens, she contended, the fear of punishment will prevent users from seeking help.

Ms Maiden pointed out that fines are inherently inequitable because they hit disadvantaged people hardest. She also urged that all illicit drugs should be treated the same in terms of decriminalisation.

She invited the Attorney General “to be bold in modernising our drug laws and reform”.

Asked what church members and others concerned about the issue of drug law reform could do, Ms Maiden suggested three things: