Murder in the Garden 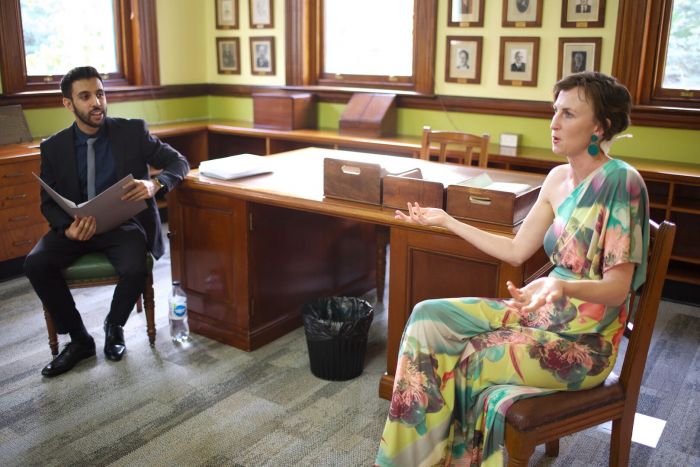 Murder in the Garden, presented by Sydney’s Royal Botanic Garden in association with Théâtre Excentrique and Alliance Francaise, offers the mystery-loving public the opportunity to become detectives.

As a starter the excited audience are offered a complimentary glass of wine, and antipasto spread and, if they wish, they can view the RBG’s most recent exhibition, Plants with Bite. This fascinating display of plants that lure, trap, kill and digest insects (mostly) creates an appropriate atmosphere for the thrilling revelations of deception and death that are to follow.

As they gather in the main hall, the audience are each given an auction paddle and are asked to bid for the contents of a time capsule only recently opened. We learn that earlier in the day, Sarah Gardener, deputy director of the Gardens, was attacked and objects stolen from the capsule. Our suspicions are aroused immediately. Why? We learn that valuable purchases of carnivorous plants made by the RGB have been lost in transit and that a former director, John Desjardins, who died 10 years ago, is thought to have been murdered.

One by one, the audience are introduced to the suspects, Harry McKay, botanist, Rory MacNamara, head of the Tropical Plant Department, Paige Wool, research director, and of course, Sarah Gardener. In addition, there is Samantha Pitman, a former workshop planner, who may have been involved as she was working in the Gardens at the time of the murder but has since been killed in a car accident.

Divided into four groups according to the colour of their paddle, the audience of eager detectives are issued with booklets in which they can take notes as they participate in the process of identifying the perpetrators. As they move from room to room they witness the interrogation of each subject, view CCTV footage of interrogations of the suspects at the time of Desjardin’s death, visit the evidence room which sets out information relevant to each suspect and their movements, and visit a forensics lab where they conduct tests.

Of course, all of the suspects have motivation, and one of two, Harry and Rory, appear more likely than the other staff members. However, after judicious and lively weighing up of their observations each group arrives at a decision, and then all gather in the hall to learn whodunnit, whytheydunnit and howtheydunnit.