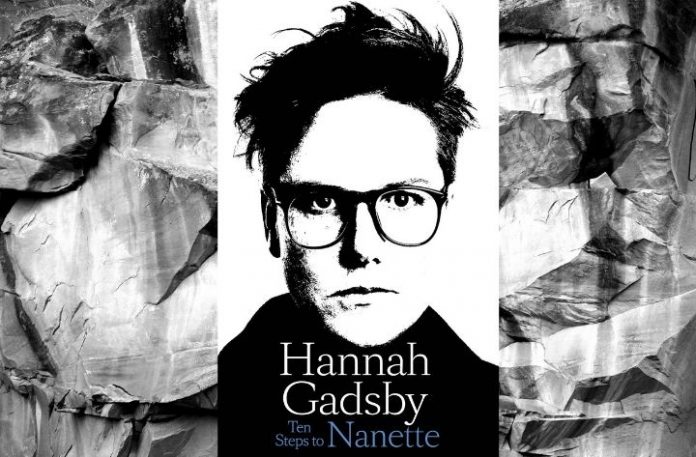 In 2017, I was fortunate enough to be in Melbourne at the time of the Comedy Festival and bought the last two available tickets to Hannah Gadsby’s new show, Nanette which was making its debut. I had seen her perform Dogmatic at the Belvoir St Theatre in 2016 and seen her on TV in Just Like Me and with Adam Hills.

I liked her work and always enjoyed the lightly fictionalised version of herself she played. However, as followers of Gadsby’s work will know, the version of herself she played for laughs in her shows came at profound cost and was rooted in deep trauma, both intrinsic and extrinsic to her personal identity, adjunct to depression and later, her autism.

Nanette, as she frequently refers to in her memoir, Ten Steps to Nanette, had an unsettling effect on the audience. Its unrelenting visceral power held the early unsuspecting audience that I was a part of spellbound and clearly presaged the international juggernaut it would become.

The process of the creation of Nanette is deeply tied to Gadsby’s personal history and she probes both her family and the history of Tasmania, being a teenager during the debates around decriminalising homosexuality in the 1990s, with gays being described as “subhuman” by local politicians and activists at the time.

Gadsby later writes a powerful post articulating the lasting traumatic effects of such hatred and violence – responding to the Marriage Equality plebiscite – and is surprised when her message goes viral and is supported.

One of the things that is most obvious throughout Ten Steps to Nanette is Gadsby’s deeply intelligent and philosophical awareness about the purpose and function of comedy. In Nanette, Gadsby refused to degrade herself any longer for laughs. Her ethical integrity was too strong. However, Gadsby’s dexterity as a comic never wavered, which has clearly continued to be a hallmark of her shows, demonstrated in Body of Work, albeit with more joyous subject matter. Ten Steps to Nanette is a stimulating memoir from a visionary voice.