Making a return to magic realism, Paul Gilchrist sets his new short play Simple Souls in an abandoned night club, a venue reflecting the despondent mood of its central character, Marguerite (an impressive Madeleine Withington). She feels that the world has let her down, abandoned her to a joyless existence in which real connection is replaced by technology, honest response by hype, and common sense by rules.

The performing space becomes the theatre of her mind in which she plays out conversations with societal behaviours that anger her. Over-regulation takes the form of a very irritating landlady, Terri (Lisa Hanssens), whose hyper-vigilance about damaging the space extends to her frequent, disconcerting descents to the floor to examine it for signs of wear. She appears without knocking, intruding through curtains, as if Marguerite has no claim to private space. Terri’s manner is always concerned, but her intention is to control.

A more curious and less easy to place character is John (Lewis Scamozzi), towards whom Marguerite is less brittle and more caring. He appears unobtrusively, stands quietly and at times hovers as if it might be possible to intervene. He confines himself to commenting that Marguerite has “a good heart”, softening the edges of her scheme to take vengeance on an insane society and the stupid people who accept it, by indulging in the theatre of cruelty.

Devising a plan to hold her own “reality” show that she hopes will “really slice into the troubled heart of modern society”, she places a sign on the lampposts advertising for non-actors to take part in a theatrical project. Gathering a group of what she sees as “simple souls”, people like her – although she cannot see this – who are lost in anger and grievance, she attempts to expose their inanity in a series of satirical Q&As.

The four characters are skilfully rendered by Gilchrist and superbly performed by the actors. As a source of hilarity they are unsurpassable until a faint unease becomes the firm conviction that we all share their problems to a degree.

Simon Lee as the choleric rage-addicted tweeter, Thomas, and Julia Christensen as Trudy, a larger-than-life exhibitionist and Thomas’s secret provocateur, bring marvelous energy to their roles and to the play as a whole. The contrasting characters of the dithery Bridget (Thu Nguyen), looking for lost causes, and especially the gentle, compliant Veronica (a lovable Alison Benstead), whose companion arm puppet (looking strangely cognisant of the emotional temperature) accompanies her everywhere, bring a depth to the play.

Each of the four characters feels lonely and undervalued, lost and disconnected, concealing his or her sadness beneath various psychological tics except for Veronica, who calmly wears her self-doubt on her sleeve. They would like to live in a world where they felt they had made a bigger impression, and where their existence counted for something, and try to create a sense of their own meaningfulness through technology.

Eventually the feisty and bitter Marguerite, like her namesake, Marguerite Porete,

14th century author of the mystical work, The Mirror of Simple Souls, discovers that living in an imperfect world and engaging in everyday life, is the better option. Through her imaginary and theatrical engagement with those she recruited to her project believing them to be inferior, she discovers her own commonality. The suitcase she opens at the close is empty – her ego and baggage have vanished.

Subtlenuance, presenter of Simple Souls, is a courageous, small, Sydney-based, independent theatre company, which once again must be congratulated on yet another production that seeks unapologetically to offer less mainstream insights into the troubles of our times. 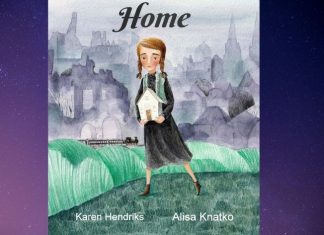 Marjorie Lewis-Jones - October 5, 2021
“In a snowy mountain village, my family had lived peacefully for hundreds of years ...” – so begins Karen Hendriks’ new picture book for children aged 7 and upwards and inspired inspired by the author’s mother, grandmother and great grandmother.

How to draw – online tutorials