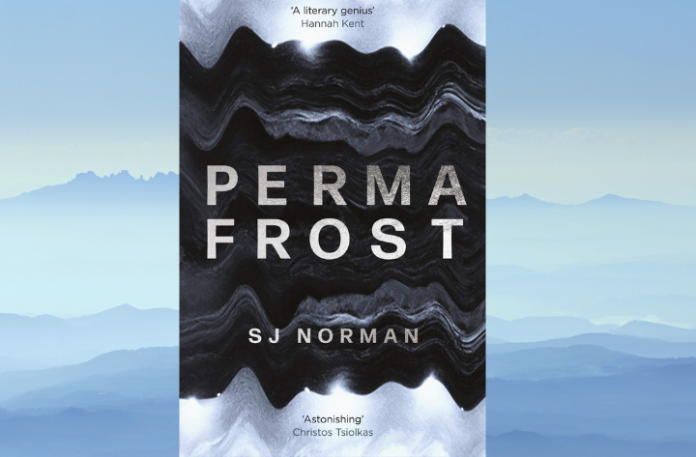 The first hint that this debut short story collection won’t be sunny and upbeat is its title. Permafrost is formed from ice holding various types of soil, sand and rock in combination and, as the Earth’s permafrost melts, it releases its greenhouse gases into the atmosphere, creating a feedback cycle that increases climate change.

Layers, liminal spaces and secretions are Permafrost’s groundwater. The mood of the stories is closer to the broody greyness of a Scottish loch than the glittering seas of SJ Norman’s home country, Australia.

As the narrator in “Hinterhaus” says of the homesickness evoked by an “oily and grim” London summer: “the brown fug of the Thames makes me pine, more than ever, for the Pacific. For long shadows and bare feet and endless blue.”

There are flashes of summer light, but also the bleak backdrops of Eastern Europe, a wintry hunting lodge in the UK, a cold rural Japan, and a bland hotel in Canberra.

If the settings themselves are unsettling, what happens within them is even more so. Norman creates intense characters and offbeat plotlines with great precision – destabilising the reader as we scrabble for purchase, luring us along with taut writing.

In “Unspeakable”, for example, the narrator sculls shots with a nineteen-year-old millionaire from Warsaw before visiting Auschwitz-Birkenau and describes the experience as “the pinnacle of tourist kitsch: I found the vodka, and now I have to find the death camp. I get up and keep walking, keep following the fence.”

In “Playback” the ex-lover’s new lover is “Just another German punk dude in his thirties, a guy with two pairs of pants, a room full of guitar amps, rich parents and no bedframe.”

In the same story, Norman’s description of “the rhythm of birdcall and tidal rivers” is one of the most lyrical passages in the book and draws out the sounds the narrator hears as they arrive back in Australia: “The currawong, the river traffic; these are my bone songs. These are the sounds that have held me since I was born and have never failed before now to sing me back into this ground that grew me up.”

It’s a moving meditation on sound, time and loss.

“Whitehart” is chilling and fable-like. It is also the piece most likely to give you nightmares. A man with fine white fur and a missing middle finger invites Norman’s narrator to eat venison-heart stew and later to enter him completely. The hybrid nature of the human is given play and the visceral threat of the woods and the plants and creatures that inhabit or enter it is palpable.

In fact, I was relieved to discover Norman is that rare writer who can deploy the mythological ability of human beings to metamorphose into other animals with great cleverness.

As I’m writing this review, a friend texts to say a woman he’d worked with years before had appeared to him in a dream and she was forced to eat uncooked lamb in his presence.

“Without this dream, I probably would have forgotten her,” he says. “But clearly, she has a strange place in my subconscious.”

Permafrost is a bit like that. It feels raw and strange and makes you want to tear at it and swallow it down quickly. From there it takes up residence in your subconscious and haunts your dreams. Unforgettable.