Be prepared for a new, pared-down, fast-paced adaptation of Agatha Christie’s first novel The Mysterious Affair at Styles under the vigorous direction of Tom Massey. There is no lingering on the overstuffed sofas of a last-century English country mansion in this whirlwind version of a whodunnit, howtheydunit and whytheydunit. Instead, the pursuit of the murderer leaps from one possible clue to another with witty panache and a rollicking energy.

Ingeniously, the set design both overcomes the limitations of a small stage and matches Massey’s minimalist vision. Apart from the courtroom scenes there is little stage furniture, and metal chairs suggest whatever setting the action demands. Arranged in different ways chairs can become a sitting room, a dress-up box, or a chemist shop and with the addition of a steering wheel and the well-timed swaying of the actors evoke a dangerously erratic car trip.

With the need for 30 location changes eliminated, the actors are freed to move fluidly from one scene to another, reinforcing the sense of an inevitable although necessarily obscure progress towards the unmasking of the murderer. The fast-moving flow of events is further facilitated, and the entertainment value enhanced by having the props handed to the actors from the side of the stage with commendable timing. Some – for instance, the memorable stain on the carpet – add to the good humour of the production.

The poisoning of the rich and elderly Emily Inglethorp (Denise Kitching) takes place in her country house, with its complement of staff, including a very appealing maid, Dorcas (Meg Girdler) and Emily’s dour companion, Evie (Ruba El-Kaddounmi), her place usurped by Emily’s new and much younger husband. There is no shortage of suspects as Emily’s step-sons John (Paul Adderley) and Lawrence (Patrick Gallagher) Cavendish – both possible heirs – and John’s unhappy wife, Mary (Alice Bendall, who later doubles as the very funny Dame Agatha Heavyweather), also reside there. In addition, the murder takes place in a locked room!

When Poirot (Peter Gizariotis) enters the investigation, introduced by an affable Captain Hastings (a charming Delmar Terblanche), a guest of the house and wounded war hero, he has plenty to occupy his singular powers of reason and observation. Perhaps accustomed to more corpulent or hearty Poirots – Kenneth Branagh, Peter Ustinov – and dominated by the fastidious image of David Suchet who played the TV role for 25 years, a tall and slender Poirot takes a momentary adjustment. But Gizariotis makes this early version of Poirot – a grateful Belgium refugee from WW1 – his own, as intense and tricky he beguiles his Hastings and uses the doggedly wrong Inspector Japp (Thomas Southwell) for his own ends.

Naturally, surprise is immense when all is revealed, and the ingeniousness of the method only surpassed by the cleverness of Poirot in uncovering it.

What has been a delicious and stylish romp through a Christie mystery – and one which has not neglected the more tender side of the often too self-congratulatory detective – has made big demands on a large cast in terms of knowing where to be when. Congratulations on meeting those demands without looking breathless. 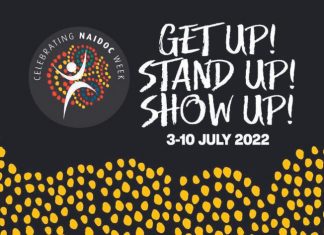 Pat Clarke - June 7, 2022
Refugee Week, NAIDOC week, Vivid Sydney and the 69th Sydney Film Festival are just some of significant activities to get involved in and enjoy this winter ...