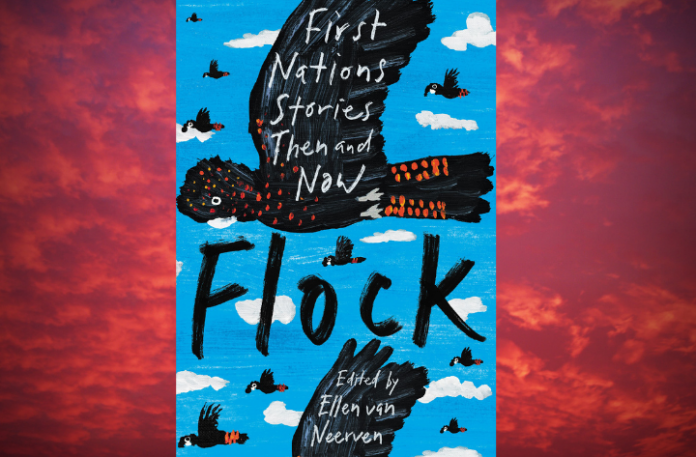 Award-winning author Ellen van Neerven has gathered a bumper crop of Aboriginal and Torres Strait Islander stories in Flock. The refreshing anthology features established and emerging Indigenous writers flexing their creative wings and considering myriad concerns in their fiction, including the joys and struggles of our First Nations people.

Van Neerven is of Mununjali Yugambeh (South East Queensland) and Dutch heritage. Their story “Each City” is deeply unnerving. It charts the flight of a young Indigenous musician with a “strong, unfiltered voice exposing the realities of our people under this government” who is under threat. Despite the narrator’s embellished tales of Australia’s openness, the reality is there are no more koalas, media is censored, languages other than English are banned and political artists monitored and seized. It is very hard to feel safe.

“Born, Still” by Jane Harrison (a Muruwari descendant) charts the sadness of having your baby die in your womb and then needing to birth it in hospital – where you know others are celebrating their newborn’s healthy arrival.

“Frank Slim” by Tony Birch offers us an insight into a fiercely protective brothel owner who has adopted a small boy and is using everything in her power to keep him safe.

“Stepmother” by SJ Norman is a belter of a story – and made me eager to get Norman’s first book Permafrost due out from UQP in September. The young narrator is (somewhat reluctantly) spending time with her father and stepmother in Canberra. They head to the National Gallery to an exhibition showing the evolution of corsetry.

“I was pre-pubescently potato-shaped and I regretted not living in an era of stiff bodices and long skirts. I was reminded, on a daily basis, of my failure at executing girl-ness to the satisfaction of my female elders. ‘Womanhood’ was a yet remote and compelling proposition: among other things it seemed as though woman-ness was something you could put on and take off. It had forms that were standardised and replicable. Looking at rooms full of corseted waists, I felt some deep and perverse relief. I wondered what it would be like to always be so upright, to be so held, to relinquish your form to that whalebone embrace.”

Norman is equally masterful in describing the Canberra hotel in which the fracturing trio lodges and loses it.

Stories by Melissa Lucashenko (Goorie author of Bundjalung heritage) Tara June Winch (Wiradjuri) Adam Thompson (Pakana) and Mykaela Saunders (Goori) add nuance to the array on offer. Saunders is also editing the world’s first collection of blackfella speculative fiction for UQP, supported by the Australia Council for the Arts – so this will be another volume to seek out.

As van Neervan writes, the stories in Flock “span generations, geographies and genres. Some are touching, some gritty, some funny, many all three”.

I savoured them over several weeks – dipping in and out to absorb the highs and lows and layers of meaning. It felt good to let the stories wheel and swoop like this. By the time the “birds” had landed together, I was hooked.