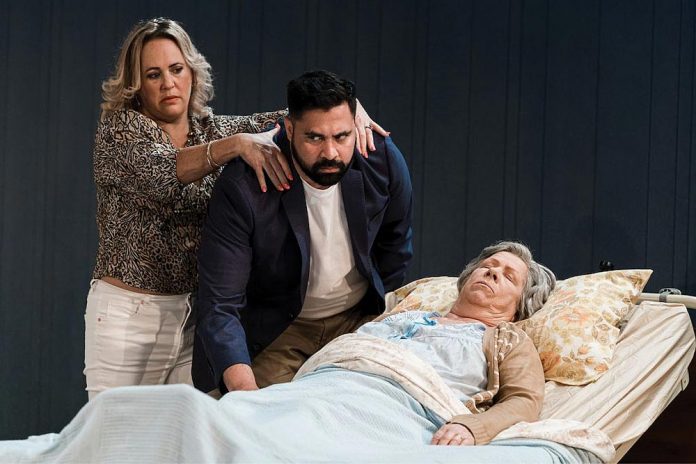 Ostensibly, Kodie Bedford’s comedy is about the reunion of a dysfunctional family drawn back to Geraldton by their grandmother’s imminent death. However, on the well-tried principle that comedy makes unpalatable truths acceptable, it is an ultimately hopeful interrogation of post-colonial Australia.

As the audience sits facing an old-fashioned wallpapered and carpeted room, listening to an 80s pop tune from a cassette player and surveying assorted mementoes and photographs decorating a floating shelf, they in turn are surveyed by a revolving and uncomfortable spotlight. They are here, it is being suggested, to answer uncomfortable questions.

When the sharp-tongued but appealing Bernadette (Chenoa Deemal) enters she straightaway points an accusing finger. Racism in Sydney is complicated, she says, and she’s glad to be back in Geraldton (and we note that she removes her white boots) where discrimination is obviously felt and crudely expressed. Things being “complicated” is a keynote of the play and a conflicted Bernadette, the most responsible and empathetic of the assembled family, struggles to establish order out of chaos.

Nan (Valerie Bader), once wheeled onto the stage in her hospital bed, and emphatically silent, is the focal point of the stage action. She has held her multi-cultural, emotionally dysfunctional and gender-diverse family together, but who will, who can, inherit her role? Her daughter, the irrepressible but sad clown Dawn (Sacha Horler), who has been committed several times, and her grandchildren – the gay Sebastian (Alex Stylianou), up-tight farmer’s wife, Marie (Shirong Wu), and anxiety-prone Bernadette, fathered by respectively Maltese, Chinese and Aboriginal boyfriends – all have enough problems managing their own lives and mismanaging familial relationships.

While Bernadette is obviously the one who has the capacity to centre the family, she is held back by fear. Since a child, she has been haunted by the barbaric descent into madness and murderous massacre of the Dutch mutineers following the wreck of the Batavia, and she is now haunted by the fear that she and her siblings are destined to become mad. Is her family cursed? Are we all cursed?

Bedford’s Cursed! is a strong and thought-provoking play, at times hilarious, at times heartbreakingly sad. Klarwein’s direction is firm and well supported by a very convincing cast with standout performances by Sacha Horler and Chenoa Deemal.