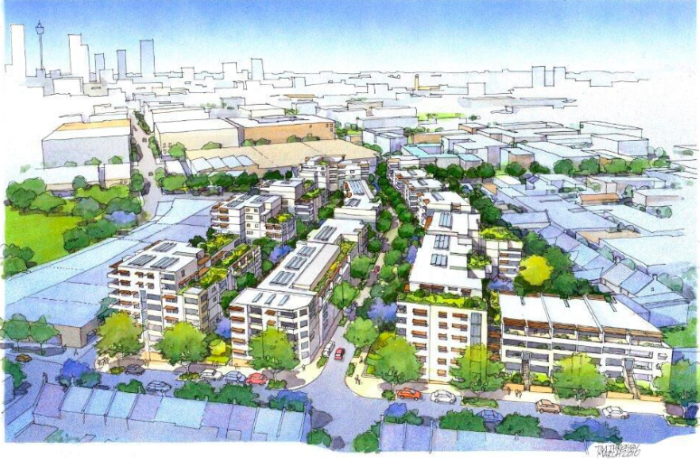 Mr Hazzard said he believes the development will have a positive response from all sides:

“I have no doubt the Cowper Street housing development will be very popular with people eligible for social housing, those key workers who pay discounted rent through the affordable housing component, and for private buyers.”

The Department of Family and Community Services estimates that social housing on the lot will be boosted by 15 percent, despite plans to sell half the land to private developers. The development aims to increase the number of social housing dwellings from 134 (the 1960s Cowper Street estate) to 153 under the new proposal.

The decision to subdivide the lot into 495 new dwellings has been met with recent controversy. Many local tenancy advocacy groups are protesting plans to develop 247 homes for the private market, as well as 153 social housing units, and 95 homes for low-income earners.

“So this is a net reduction in the amount of public housing when it’s urgently needed and the government should be focused of providing public housing, rather than making dollars from a development site,” Mr. Parker said. “It’s remarkable that this development will actually provide less public housing than the previous site.”

The current plan involves the transfer of funds made from the sale of the private housing blocks to subsidise the cost of the social housing units. A campaign for expression of interest for the sale of two blocks of land for private dwellings is about to begin.

The announcement has received the support of Lord Mayor Clover Moore, who says the city needs to consider alternate forms of large scale social housing funding. This includes “partnerships among private developers, institutional investors, the not-for-profit sector and governments”.

Mr Hazzard says the development will encourage greater diversity into the area that will benefit the residents: “This project transforms what was previously a concentrated social housing area into a socially mixed community and creates the conditions to give many people better opportunities in life.”