Book Review – Half the Sky: Turning Oppression into Opportunity for Women Worldwide 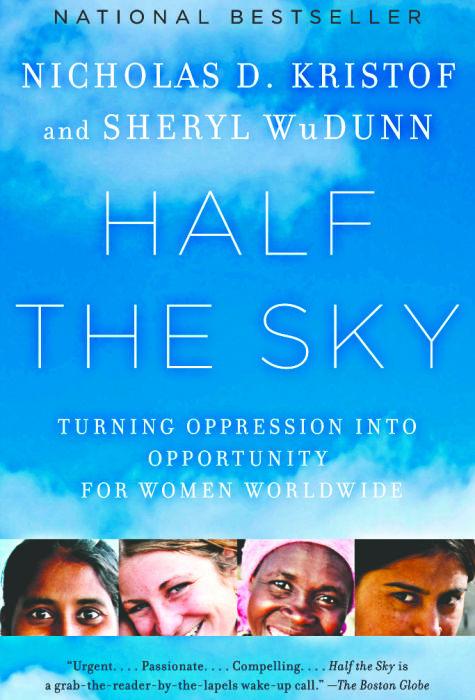 Kristoff and WuDunn are journalists and Pulitzer Prize winners who broach the issues of sex trafficking, sexual violence, maternal mortality, inequitable access to education and gender bias head on – drawing their insights from encounters with survivors, and advocates for change. They show how girls and women have been beaten to death over dowries, gang-raped if they leave the house, endured genital mutilation from cutting, and obstetric fistula from acid attacks, or were married off or sold into brothels as children.

Like most issues in the list, early and forced marriage is still a widespread problem inhibiting girls’ progress. The stats are serious – one in three girls in developing countries (except China) get married before they turn 18. Girls who are child brides don’t receive education, are more vulnerable to physical and sexual violence, and bear children before they are physically or emotionally ready to do so.

The violence begins in girlhood, and extends into womanhood and across generations.

United Nations (UN) Women is working around the world to mobilise communities against the practice. Committed individuals are also making headway. Theresa Kachindamoto, the senior chief in the Dedza District of Central Malawi, who has power over nearly 900,000 people, has annulled more than 850 child marriages in the last three years. She has also sent hundreds of women back to school and made inroads into abolishing cleansing rituals that involve girls as young as seven to go to sexual initiation camps.

Half the Sky has done much to encourage a movement of people to fight for liberation. Its website offers games, blogs and free educational videos to help raise awareness about the oppression of women and girls and to help NGOs and others improve conditions for them.

Kristoff and WuDunn argue that ending women’s oppression now is as necessary and as momentous as ending slavery was in the past. They also urge us to consider why we continue to neglect such a huge humanitarian issue.

The problems facing women and girls can seem enormous and intractable. Half the Sky succeeds in making them graspable and shows how simple efforts can be effective in bringing change.