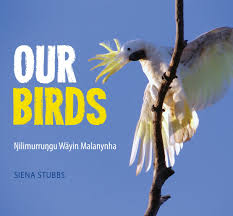 Suddenly, the birds Siena enjoyed observing on her early morning walks with her father, and her dog, came into focus. She created a photo book of the best shots and these were accompanied by stories of the birds she’d learned so much about while out in Yolnu country with her family.

Siena’s book was discovered when her brother posted a photo from it on Facebook and got a host of likes and shares. ABC Darwin picked up on the buzz and in February 2016 it posted a plea for a publisher on Facebook.

“This is 14-year-old Siena Stubbs,” it said. “She is holding a book she created called Nilimurrungu Wayin Malanynha which translates from Yolngu Matha to Our Birds. It contains gorgeous photos that she’s taken of birds from around her home of Yirrkala, along with beautiful descriptions of the birds, their personalities, the place they have in her corner of the Territory, and their names in Yolngu Matha. Only problem is she’s only got five copies. Any publishers out there want to give her a hand?”

Magabala Books responded to the plea, which (happily) means we now have this warm and informative book. It’s a love song from a young Indigenous girl who appreciates the gift of the natural world around her and the wisdom of the ancient culture she’s part of.

“Yolnu culture has been passed on from generation to generation and everything in it has a reason and a story behind it,” Siena told NITV Australia in 2016. “I feel like I want to spread the message to the world and Australia, I want to show them the special side of North East Arnhem Land.”

I was privileged to be in Yirrkala in September 1991 to write a story about the ordination of Liyapidiny Marika, the first Aboriginal woman to be ordained in the Uniting Church. All these years later, I remember the birdcalls that woke me, the beauty of this remote area of our country and the wonderful people I met there.

Siena Mayutu Wurmarri Stubbs now describes herself as a 15-year-old Yolnu girl who loves photography. “My malk, or skin is Gutjan, I am a Gumajt girl from the Yirritja moiety.”

She explains how in Yolnu culture, everything – from a body of water to a specific type of tree – is divided into two moieties. Yirritja and Dhuwa. “The birds give themselves their Yolnu names by the sounds they make.”

Siena recommends making knock-knock jokes with Murriyil’ (Torresian Pigeon, Yirritja) because it sounds like it’s saying, “Who who, who who”.

She writes about Bilitjpilitj (Red-winged Parrot, Yirritja) as having a looping flight and widely spaced wing beats, and of Ganyiti (Brahminy Kite, Yirritja) as soaring high in the sky (like a kite) with the sun shining through its feathers.

She identifies Natili (Black Cockatoo, Dhuwa) as the harbinger of the wet season, and a rapacious consumer of the seeds of the Matpana (Indian Almond Tree). She also marvels at the colour of the Djirrindidi (King Fisher, Dhuwa) and the bird’s amazing shape, which helps it to dive into the water smoothly to catch food.

Djiḻawurr (Orange-footed Scrub Fowl, Yirritja), she says, is a sacred spirit of the Gumutj, Siena’s clan, and that Djulwadak (Figbird, Dhuwa) has a “beady eye surrounded by a bright red eye patch”.

She last saw a Ṉama’ (Jabiru, Dhuwa) when she was coming back from her homeland, Bawaka (otherwise known as Port Bradshaw). And the Stubbs family also hunt Gurrumatji (Magpie Goose, Dhuwa) in the swamps. “The smell of the lily leaves and roots crushed by their feet as they greedily munch on water chestnuts is called läka and we cry for this smell.”

There’s a pronunciation guide at the front of Our Birds and, for each copy sold, a donation will go to the Small Seeds Big Reads: Magabala Books for Little Hands philanthropic initiative.

I’m so glad we have this book, which captures the spirit of Yirrkala and its amazing birdlife, and the joy of a young Indigenous person whose passion and intelligence shines like birdsong.