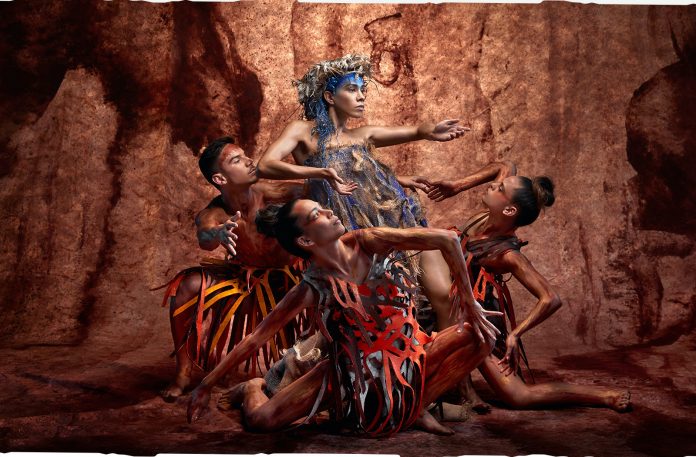 Bangarra Dance Theatre’s new work, SandSong, telling the stories of the land and the people of the Kimberley country, was set to tour Canberra, Brisbane, Melbourne and Bendigo in June to September this year but owing to Covid-19 the tour was postponed until 2021. Meanwhile, the dancers continued to work from their homes, looking forward to being able to perform and reconnect with audiences when it is safe again.

However, Bangarra found creative ways to fill the gap and stay in touch during lockdown. Initially, the powerful Bennelong (2019), depicting the life of the iconic Aboriginal figure Woollaraware Bennelong, a Wangal man caught up in the clash of cultures between the white invaders and traditional owners, was digitally streamed on April 11, 2020.

Bennelong attracted a massive popular response, and three other Bangarra performances were made available online: Terrain (2012), inspired by Kati Thanda (the area known as Lake Eyre); Ochres (1996), a portrayal of the significance of each of its four colours in Aboriginal culture and personal favourite; and Waramuk – in the dark night (2012), a collaboration between Bangarra and the Australian Ballet celebrating the AB’s 50th anniversary.

To further deepen connection with their audiences by giving them the opportunity to explore these performances in more detail, Bangarra launched a behind-the-scenes platform, Nandhu – meaning “to be close” in Wiradjuri – on May 7. An extension of Bangarra’s performance archive, Knowledge Ground, Nandhu “unpicks the strands woven into each work, and enriches our understanding with accompanying interviews, how-to classes and other insights”.

For those who would like a more in-depth experience, they can be guided through a warm-up and then into a movement from “Salt” (a section from Terrain) by Bangarra dancer, Rikki Mason. They can immerse themselves in the unique and gorgeous costumes designed by the incomparable Jennifer Irwin who first joined the Bangarra Dance Theatre by cruising the photo galleries.

In all, digital has proved, to quote Stephen Page, Bangarra’s greatly revered and longtime artistic director, “a fantastic way to keep connected with our beloved audiences and allows the outreach of our stories to be extended well beyond Sydney”.