Show us your true faith, Scott

When our prime minister, Scott Morrison, first took office, he told us in the early days that he was a Pentecostal Christian.

The fact that he did this made me think that he believes that we should be told this by a prime minister or, at least, if the person concerned is religious. In announcing his Christian faith, he implied that his political life would express that faith.

Now, we might well ask him how this faith has determined the way that he has acted, or not acted, in relation to the life of the Tamil Murugappan family?

Given that, at the centre of our Christian faith, is the commandment to “love our neighbours as ourselves” how has our prime minister given life to that as he sees before him the intense suffering of this family, especially that of one of their children?

One of his cabinet members has, at last, allowed the family to join together again – but with no apparent influence from the prime minister. Also, there is nothing, as yet, to suggest that the family will now be allowed to return to their home in Biloela, the birthplace of their daughter.

There should be no delay in arranging this, given that all of us took over this land from its people without permission or any true respect for its owners – the Indigenous Aboriginal people.

Show us your true faith, prime minister, and tell us what it means to love our neighbours as ourselves. 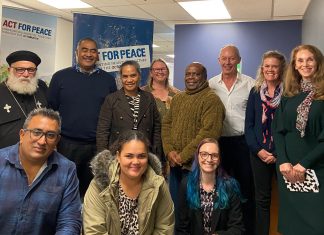 Emma Brophy - August 2, 2022
Hunga Tonga-Hunga Ha’apai’s volcanic eruption sent atmospheric shock waves, sonic booms, and tsunami waves around the world. It was the communities of Tonga, at least 84,000 affected people, who bore the brunt of the impact.