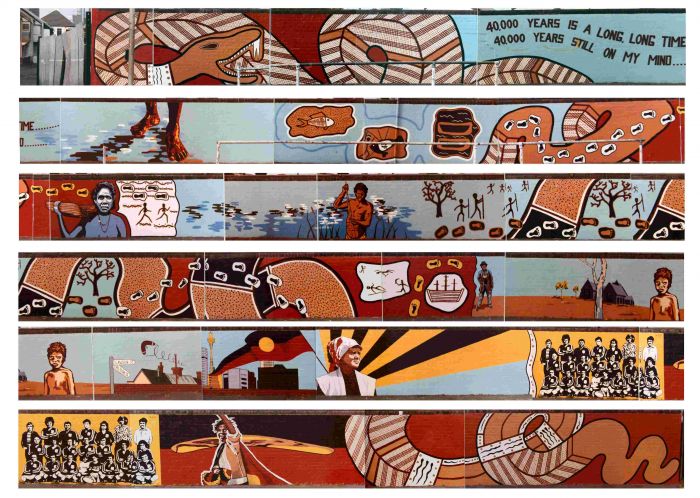 All of the original mural as painted in 1983 (the length of the 91metre mural has been stacked to fit in the post). Photo: Supplied

The Redfern Station Community Group (RSCG) has been campaigning to restore the ageing mural since 2013. RSCG convenor Desley Haas acknowledges the previous attempts over many years to attract funding to restore 40,000 Years by the artist Carol Ruff, Sara Hamilton and the National Centre of Indigenous Excellence, and the Aboriginal Medical Service Redfern. RSCG’s is by no means the first attempt.

Ms Haas said that while she is proud of the network of organisations that has formed to protect and promote the mural, “It’s ridiculous that [the restoration campaign] has gone on this long.” She paid tribute to the local residents, volunteers and organisations like the City of Sydney Council and its Redfern Neighbourhood Service Centre and Redfern Community Centre, the Aboriginal Housing Company,  the Metropolitan Local Aboriginal Land Council, Eora College – Sydney TAFE, Sydney College of the Arts – Sydney University, Counterpoint Community Services and former City of Sydney Councillors Irene Doutney and Robyn Kemmis for their support over many years of organising and fundraising efforts.

The RSCG was awarded an initial $10,000 Matching Grant by the City of Sydney in 2015 for a Feasibility Study into restoring the mural and for information boards, which are displayed beside it, about the mural’s history, present efforts and supporters for its future restoration.

The next step for funding is to obtain a Creative and Cultural Grant from the City of Sydney for the balance of the funds required. “If we are successful, we hope to start the restoration in August,” said Ms Haas.

Originally painted in 1983, 40,000 Years has a significant place in Australian art history, according to art history scholar and RSCG member Fiona Lanigan. “40,000 Years was created collaboratively with community consultation and artistic collaboration of young aspiring Aboriginal artists co-ordinated by mural artist Carol Ruff, a Redfern resident at the time. The 1983 mural was created at a time when a new Urban Aboriginal aesthetic was emerging adding to the art historical significance of the work. The urban Aboriginal historical and contemporary narratives were expressed in a hybrid visual language of traditional motifs alongside western pictorial expression such as portraiture, creating a cross-cultural dialogue. 40,000 Years is community specific, with an Aboriginal cultural viewpoint that contains multiple themes that anchor the mural to Redfern.”

“I can’t recommend this project highly enough for its importance to Indigenous culture, social heritage and local history,” said former Deputy Lord Mayor Irene Doutney in a letter of support to the RSCG. “There is a great deal of excitement in the community and general population that pass the mural every day and acknowledge the importance that it holds in local Indigenous history.”

Lyn Turnbull, also a member of the RSCG, said: “People realise the voices and presence of Aboriginal people in the area [are] important as does Council, which used a photograph of the mural on the cover of its Barani Barrabuga – Yesterday Tomorrow – Sydney’s Aboriginal Journey walking tours booklet. We just need Council’s backing for its restoration.” She points to the fact that the mural has not been heavily tagged as a sign of the community’s respect and appreciation for the artwork.

Aunty Donna Ingram leads walking tours of noteworthy sites in Redfern’s Aboriginal history. She said that the mural gives her a great sense of pride, and she aims to pass that on to the people she tours, especially young Aboriginal people. “I like to point it out because it looks so worn out. I don’t want people to look at it negatively… [I] make it clear how important it is,” she said.

According to Aunty Donna, people are curious about the restoration. One young Indigenous woman on the tour was particularly distressed by the artwork’s rundown state, said Aunty Donna: “She was so upset about how worn out the mural was, she wanted to paint it herself.”

Aunty Donna has a personal connection to 40,000 Years – her uncle is a member of the Redfern All Blacks football team pictured on the mural.

Other iconography includes the Rainbow Snake, the Aboriginal flag, the arrival of British tall ships, and the Stolen Generations.

UNSW lecturer and artist Rebecca Shanahan praised the community spirit behind the artwork in her letter of support to the RSCG: “40,000 Years is a significant community artwork that provided a message of hope at a difficult time for that community. These challenging aspects of Redfern’s history need to be acknowledged rather than suppressed, and the community’s active creative response to such challenges by painting this mural should be recognised and celebrated.”

Newtown MP Jenny Leong, said the mural represents the “heart of Redfern”. “It is crucial that we ensure that the significance of Redfern as a site of strength, struggle and resistance for Aboriginal people remains at its heart,” Ms Leong said.

Also providing funding towards the mural is UrbanGrowth, whose General Manager Duncan Read said: “We are pleased to support the restoration of this iconic local landmark so that it can continue to be enjoyed by generations to come. We look forward to hearing more from the Redfern Station Community Group on the feedback it gets on the renewal of this much-loved artwork.”

Despite the many voices of support for the mural’s restoration, it is not part of the City of Sydney’s Eora Journey project, which celebrates Aboriginal heritage, and includes seven public artworks, curated by Aboriginal writer and curator Hetti Perkins.

Fiona Lanigan argued that 40,000 Years should be included in the artworks because it has cultural qualities acquired over time that newer works of art may not have. “It has historical resonance as public art,” she said.

City of Sydney Labor Councillor Linda Scott agrees, and has written to the CEO of the City of Sydney to ask whether 40,000 Years can be included.

However, her colleague, Clover Moore-aligned Councillor Jess Scully, said that in her opinion it wasn’t appropriate for a non-Aboriginal person to decide what artworks should be included in the Eora Journey: “Hetti is the person who should be making the decision [to include it]. Certainly not me, certainly not Councillor Scott.”

Neither councillor would speculate on the outcome of the grant application, however, both affirmed their personal support for the restoration.

Councillor Scully said: “I think it’s a really important and significant project and it’s one that the City of Sydney has supported since 2012.”

Councillor Scott said she was a strong supporter of street art and was proud to be championing a draft City of Sydney street art policy. She described 40,000 Years as “a crucial piece of public art for the city”.

If the application is successful, the restoration will be overseen by the original artist, Carol Ruff. She will be assisted by other local artists and art students.