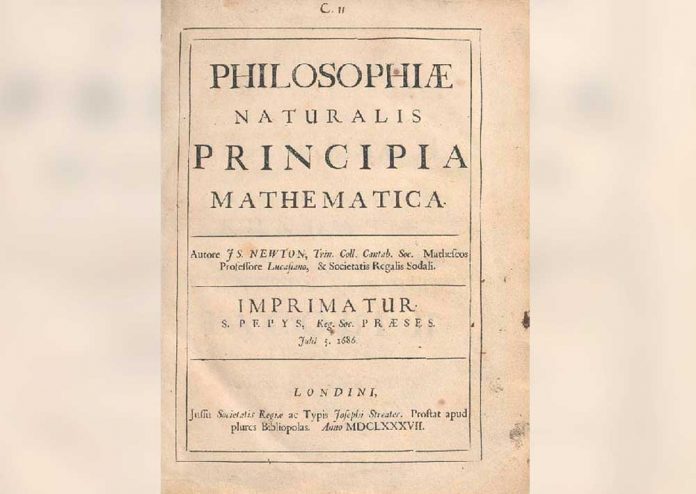 This article is sponsored by the University of Sydney. Authorised by Vice Chancellor and Principal Dr Michael Spence. Enquiries: 9351 2000; info.centre@sydney.edu.au

First published in 1687, Principia (Philosophiae Naturalis Principia Mathematica) is one of the most important books on natural philosophy in which Isaac Newton establishes the modern science of dynamics and outlines his three laws of motion.

While the original print run is estimated at between 250 and 400 copies, there are only 189 surviving first editions in the world and only four with annotations by the English mathematician himself. Of these four copies, the Sydney copy of Principia is the only one in the Southern Hemisphere and is held in the Rare Books & Special Collections at the University of Sydney library.

This extremely rare copy of the seminal text is believed to be a personal copy of Newton’s, which he and his assistant Roger Cotes sent to other mathematicians to eliminate any errors before the second edition was published.

“It clearly shows how Newton’s ideas were received by his contemporaries”, said Julie Sommerfeldt, Manager of Rare Books & Special Collections at the University library.

Scottish mathematician John Craig is thought to have authored the corrections which feature at the front of the book along with other annotations throughout. Further corrections can be seen in this copy, written by Roger Coates and Newton himself.

“You could liken it to the 17th-century version of the peer-review process. Handling the physical item itself is a special experience; you can see the words inked on the page and know that they came from Newton’s own hand.”

How significant is the book?
Explaining the significance of Principia for the field of mathematics and science in general, Professor Geordie Williamson calls the work “completely revolutionary”.

“The publication was really the first time we saw a physical law that was true everywhere. Without this work, for instance, Maxwell’s equations governing electricity or Fourier series equations on heat, would not have been possible”, said Professor Williamson, Director of the Sydney Mathematical Research Institute at the University.

“Isaac Newton totally rewrote the rule book in terms of the separation of what happens on Earth and what happens in space. Before Newton, European science considered there was a fundamental divide between ‘Heaven and Earth’.

“Through Principia, Newton established the fundamental fact that the same laws apply here on Earth as those in the heavens.”

How Principia almost didn’t go to print
As Newton was finalising his work the Royal Society was printing a book called The History of Fishes.

“This book is quite lavishly illustrated and unfortunately the Society didn’t have enough budget to publish Principia,” Ms Sommerfeldt said. “So, Edmond Halley – the English astronomer of Halley’s Comet fame and also a Clerk of the Society – stepped in to personally fund publication of the book.”

The first edition of Principia features a poem written in Latin by Halley, titled “To the illustrious man Isaac Newton and this his work done in fields of the mathematics and physics, a signal distinction of our time and race”.

The future of Principia at Sydney
Ms Sommerfeldt described the condition of the book as excellent: “With careful handling, this copy will hopefully withstand centuries to come so that future generations can enjoy and study it.”

The University of Sydney copy of Principia has been digitised and is available online alongside other digital resources via the University’s digital collection.

Members of the public, students and staff can access the book at the University of Sydney Fisher Library by using the booking system at https://library.sydney.edu.au/collections/rare-books.