A place to call home – An interview with Dr Olfat Mahmoud

The book documents the heartache of people who are forced to leave their own land. People who have no choice and no say in their leaving or their mode of departure. People who dream and yearn of returning to their own land, their own home, their own animals and to a peace that existed between all religious communities in that land.

It does not document a loss of identity or culture; this has been kept alive through story. 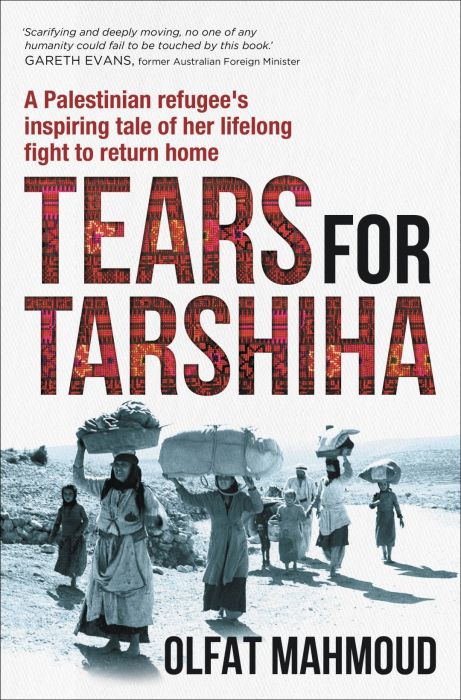 Tears for Tarshiha is the story of Dr Mahmoud’s maternal grandparents and their flight from Tarshiha in upper Galilee as a result of the Israeli occupation in 1948; and of Dr Mahmoud’s own life as a child and young adult growing up in Bourj el Barajneh, one of the refugee camps in Lebanon’s capital city Beirut.

It shows the harshness and petty humiliations of living in a refugee camp and the consequences of living through a civil war in a country that is not yours.

But it is also a story of hope and determination. Dr Mahmoud has managed to become a nurse, peace activist, academic and the founder and director of PWHO, which provides services for women, children and the elderly in some of the refugee camps in Lebanon, while living as a stateless person in a refugee camp.

Palestinians who arrived in Lebanon in 1948 and their descendants are stateless. In Lebanon they do not have the right to access educational, health and social services; these services are provided by the United Nations Relief and Works Agency (UNRWA) and other NGOs. UNRWA provides services to around five million Palestinian refugees in Jordan, Syria, Lebanon and the Occupied Territories.

In August the United States announced that it would stop over $US300 million worth of funding to the UNRWA. Along with the European Union, the US provides almost one-quarter of the UNRWA’s funding.

Dr Mahmoud said, “We believe, this is a pressure on the Palestinian refugees to accept any solution.”

She believes that people will lose hope, they will say, my children are out of school, there are no health services, we do not have the right to work in Lebanon and if they are told that they will be taken and thrown into the ocean, people will say yes, because they have no hope.

When asked whether as a result of the funding cuts other countries might offer to take refugees from the camps, Dr Mahmoud responds, “I will answer your question with a question, why?

“We have a country and we have a UN resolution that gives us a right of return. Why do we complicate things?

“We have a country, we have a homeland, we have villages, we have papers to show that we own this land, we have the key for our houses, why we should be forced to go here and there?

“We’ve had enough. Seventy years of suffering, we don’t want another stage of suffering. We hear lots of rumours, we will be taken to the Jordanian desert … and Egypt. It is enough. It’s enough. We don’t want to suffer again. You have land, you have a country. Everyone says I am Palestinian. Okay, where is Palestine? Why if I am Palestinian should I be taken to Jordan or to Egypt or Europe? Why?”

She points out that every year Jewish people from other countries are allowed into Israel. In 2017 over 28,000 Jewish people mainly from Russia and the Ukraine migrated to Israel under Aliyah, a basic tenet of Zionism where Jews and their non-Jewish descendants from the diaspora move back to the land of Israel.

She said, “They are already settled in their countries, they already speak the language of their countries. Why do you bring them back and next door people are waiting to return? I am really angry because I don’t know the world, how they can’t see the reality. We are next door and we are waiting to return back to our village and here Israel is going all over the place to bring people to Israel, to bring Jewish people. Why, and we are just a few kilometres away and we can’t go in? It’s not fair. It’s not justice, and look, I will tell you I always believe there is no peace, no peace unless we have justice and always we say peace and justice.”

When asked what peace and justice means, Dr Mahmoud says: “Giving me the right to return.”

She asks: “Why should I be in a refugee camp in a very small house, where you can’t breathe. In less than a kilometre 45,000 live, while I know the land of my grandparents, it’s a huge land, big house.”

When asked her hopes for the future she says: “I want to go to my village, this is one thing and secondly to be treated as a human being.”

Because they are refugees and deemed stateless they are seen as less than human, but she points out: “I am not stateless. I have a country to return to but the world looks at me as stateless. And they are doing nothing. They should be ashamed actually. Why? Because 70 years and they haven’t solved this problem and the problem is created by the international community in 1947, when they decided to divide Palestine into two states. They should help the Palestinians until they find a just solution for them, a fair solution for them.”